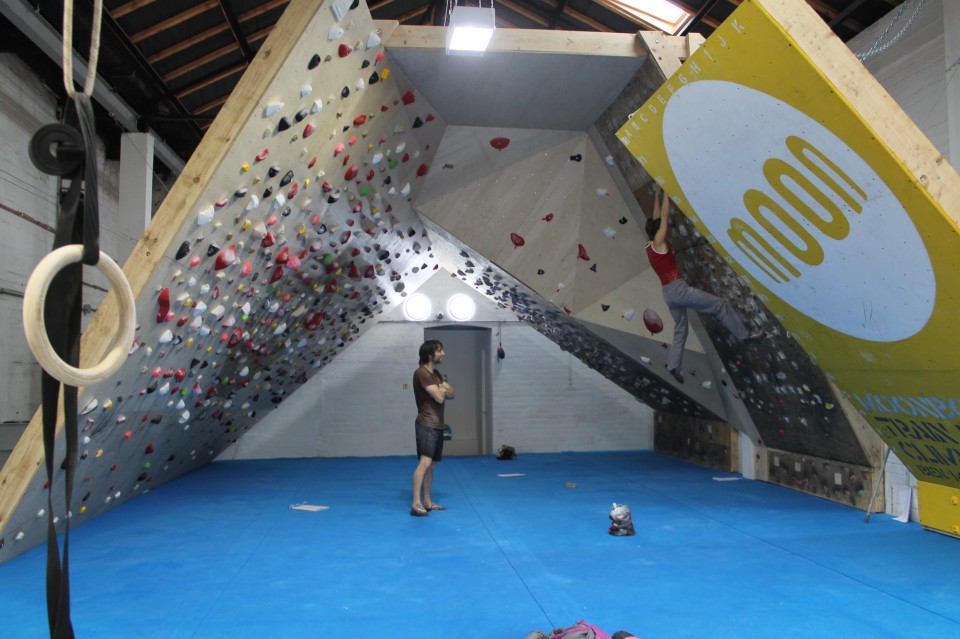 The School Room at Moon Climbing

By Richard Osborne on 7 June 2014 in Bouldering Walls

We’ve put the finishing touches to our climbing wall at Moon Climbing HQ in Sheffield.  This is now open to members; a high-level climbing facility for some of the best performing climbers in Sheffield.

One of the most interesting aspects of this build is the re-establishment of the “School Room” climbing panels; a set of climbing routes which were used throughout the 90′s by top climbers in the training venue known as the School Room. We have resurrected these boards and set them up at their original angles of 56 degrees and 28 degrees.

The old panels are faced by a giant main wall, which features a gradual curve across it’s length from an angle of 30 degrees at one end, to a meaty 50 degrees at the other. It was an interesting challenge to create a curved surface, but with some angle and number crunching we have built a wall with accurately placed panels and a great finish. It is linked to the opposing walls with a high-level roof and a fancy angled wall area, giving a seamless structure overall.

Also in the line-up is a fully adjustable “Moon Board”; a system board which can be altered to any angle from 20 degrees through to 50 degrees, though 40 degrees is the default.

And last but not least a campus board with space for 5 sets of campus rungs, and stretching up with space for a count of 13 rungs in height (this will make sense to the climbers who like to train!).